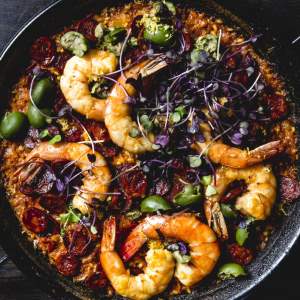 Bomba rice is a short-grain, starchy type, and its ideal texture is tender but chewy in the center, like al dente pasta. Try not to overcook. Use the shrimp shells and chorizo ends to make the Back-Burner Stock. 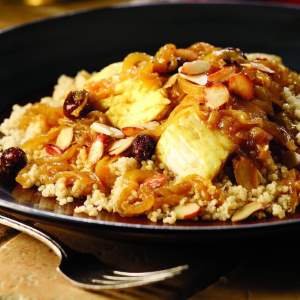 T'fayas, special-occasion dishes served all along Morocco's Atlantic coast, are known for their thick, sweet and heavily spiced sauces. This one gets a pleasant layer of sweetness from raisins and a touch of sugar, which marries perfectly with halibut.

A traditional Indian dessert, this fudgey almond wonder is a great, but still decadent, alternative to chocolate fudge. The saffron gives it an exotic almost smokey flavor and, of course, a bright marigold hue.